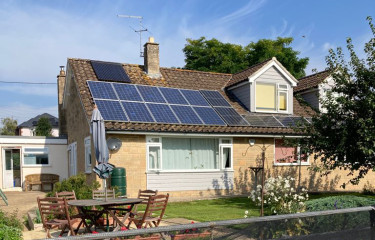 Just turn up . Park at the bottom of Westbridge Park, we are the bungalow next to the (locked) gate

Solar PV panels which charge up a Tesla Powerwall battery for evening supply of electricity.  Solar thermal vacuum tubes for hot water on the roof. Rainwater Harvesting collected in several  water butts. The front drive is porous to prevent flooding in the event of heavy rains. Productive vegetable patch.

We use about 3500kWh per year. With the first set of solar panels the amount we drew from the grid went down to 2240 kWh per year (64%) with the second set of panels and the Tesla battery it was down to 900 kWh per year (25%). Also we can use the immersion heater to divert surplus energy into the hot water if the solar thermal isn’t enough.

An induction hob uses half the energy of a gas hob. It is very quick to heat the contents of the pan as it doesn’t waste heat heating the hob. I used to boil the kettle before putting veg on to cook, I don’t need to now. The hob is very easy to keep clean - if a pan does boil over it doesn’t burn on to the hob because the hob isn’t hot enough to burn. Using a steamer reduces the amount of water needed as the same volume of water will do several sets of veg at the same time in the same pan.

Just turn up . Park at the bottom of Westbridge Park, we are the bungalow next to the (locked) gate