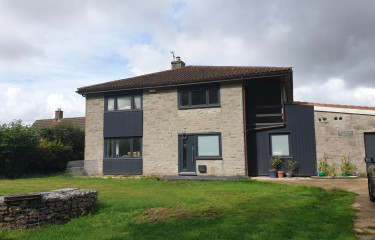 Greatfield House started to be built in the 1960’s and was then changed in the 70’s, 80’s &amp; 90’s, so when we took it on in the Summer of 2020, the first thing we started thinking about was how to take this hodge podge of a house and bring it all together as a single home, in the most eco way that we could.

We are currently towards the end of the project, and so the house still has a few things in progress, so it’s an opportunity to see a few things mid installation, but we also have pictures and samples of some of the things we’ve put in.
The house was known by all the neighbours to be an ice box in the winter, so we’ve gone for multiple types of insulation, with solid and blanket insulation in the galleried roof areas, and internal blanket insulation on all the external walls.
We’ve installed an air source heat pump, this is our second house to have one, and with this house we’ve gone for low heat, low profile, underfloor heating also (our last house had radiators with it). We only have one area where the heating is in and running fully, and we are already noticing the different way that this feels to standard radiators.
Trying to maximise natural light in the house was also an aim, so we’ve ended up knocking out a lot of internal walls, and adding lots of steel supports in, as well as knocking in additional windows and bi-fold doors.
Our aim was to also look to future proof for things we might want, like solar panels, so although we don’t have them yet, we are adding in all the cables, and choosing locations, as well as making sure the roof is structurally able to hold a significant amount, so that any future install is just a plug and play activity. We are also investigating a battery storage unit, but we haven’t fully chosen either yet.
We’ve also been investigating keeping the currently chimney, and having a backup multi-fuel heater for the main area, for heat security.
In the garden we are focused on trying to learn about growing our own food, and are starting to already bring down our food bills as the produce starts coming in. We have a veggie plot, small poly tunnel and green house going, with raised beds also.
We’ve also been trying to look as some water management around the property, as there are a few boggy areas, and we put in a gabian wall to act as a French drain, and to retain some soil we dug out for a small extension foundation, to minimise and movement of soil off site.
Our general moto has been to reuse things as much as possible, and we have been repurposing all the wood and facia stone we’ve taken out into other things.
We’ve also got a 3000Ltr water butt system, and although we don’t use it as grey water, it has been more than enough to water all the veggies and keep the new wildlife pond topped up. Our house and garden is a work in progress, with areas that are almost complete, and others that are quite a way off.
It’s been an adventure so far, and we’ve learned a lot and are happy to share our experiences. We’ve even found things like our house having one roof on top of another that part blew off in the 1987 hurricane and wasn’t fully taken down! It’s an ongoing discovery, and exploration into becoming more eco in the way we live, and the house we live in.