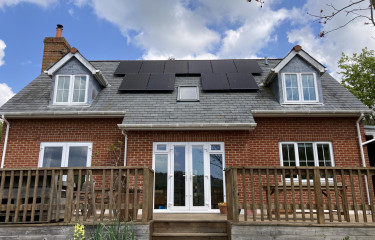 Phil and Vicki moved to the house in late 2020 from a drafty Edwardian house with poor insulation. The contrast is marked in this well insulated house, built in 2008, with lower ceilings. Their first task was to install Solar panels on the South West facing roof and they've now added an air source heat pump (ASHP) and large hot water tank which provide central heating and hot water. This installation was helped by a Government grant.

They put in the Electric car charging point for their Zoe car. They use low rate electricity at night to charge the car on a timer and also get paid by Octopus for any excess electricity generated during the day. Electricity bills have tumbled as a result. They have installed an induction hob and celebrated when the gas supply was cut off

Garden work has included putting in compost bins and raised beds for growing veg and letting no mow May run into other months as part of cultivating a wildlife garden.

Phil is one of Lyme Regis' Energy Champions, trained to advise on how to stay warm and lower your energy bills.

Parking: in the drive (not at the top on the track)